To share your memory on the wall of Barbara Fraser, sign in using one of the following options:

It is with great sadness that we announce that our beloved mother, grandmother, sister, aunt and devoted friend to many, Barbara Ann Fraser, passed away peacefully on Sunday February 7, at the age of 81 at the Cornwall... Read More
Barbara Ann Fraser

It is with great sadness that we announce that our beloved mother, grandmother, sister, aunt and devoted friend to many, Barbara Ann Fraser, passed away peacefully on Sunday February 7, at the age of 81 at the Cornwall Community Hospital, with her son and daughter in law by her side. While we mourn her loss, we are inspired by her courage, resilience, and sense of humour, never lost, even while battling through chronic pain in her later years. Born on September 22, 1939 she was the daughter of Leo and Kathleen Fraser of Cornwall, Ontario.

Barbara’s compassion served her well in her chosen profession of nursing. She graduated from the Cornwall General Hospital School of Nursing in 1960 and began her impressive career working for renowned pediatrician, Dr. Ian Gourley. She was always smiling, laughing and had a very gentle way with children. She was perhaps most widely known for administering allergy shots to a good percentage of them in the Cornwall area until Dr. Gourley’s retirement in 1980. She then moved on to become Nursing Supervisor at the Cornwall Community hospital (former Hotel Dieu) and as a poetic bookend, ended her career caring for seniors as the Administrator of Bestview (later Versa Care and now Heartwood) in 1999. She was a mentor to her peers and received national company-wide Awards of Excellence. She was most proud of the palliative care suites, gardens and the renovation to the building all constructed under her term and that still remain for the resident’s comfort and enjoyment. In later years, she took great pleasure in volunteering at Cornwall Hospice.

Barbara was exceptional at creating and cultivating true friendships and taking strength from close circles of friends from high school, nursing school, her career, and, through her many interests and hobbies. Her irreverent ‘Fraser humour’, always caught life’s ironies but not at the personal expense of anyone, and she had a penchant for telling stories. She was very close to her surviving brothers and sisters, was proud of the many accomplishments of her nieces and nephews and their children and looked forward to any opportunity to spend with them.

If you asked Barbara to describe herself her reply would be grandmother. She doted on her two granddaughters, they formed an inseparable bond and became the lights of her life. She cherished her time with them, especially each summer when they stayed with her to attend camps, and taught them how to bake her favourite recipes, including her infamous raspberry cream pie. In retirement, she travelled to visit them as often as possible, sharing in many celebrations with her daughter in law’s family for 22 years. She developed a close bond with Mr. Joseph and Mrs. Patricia Sanborn of Cornwall and their children. She will be deeply missed by the Sanborn family. Barbara’s example as a single mother with so many accomplishments in life achieved through hard work, courage and determination is her legacy for her granddaughters to be inspired by and proud of. She had an undying, unconditional love for her son, and it will forever be the foundation of who he has become as a father.

A life- long skier and tennis player she shared and passed those interests down to her son and grand- daughters and enjoyed many beautiful days on the slopes and courts with family and friends. She also enjoyed travelling, fashion, golf, dancing, reading and music, especially pipe bands at her beloved Highland Games.

Barbara relied upon her Christian faith in times of need and she was a devout Presbyterian. She gave back to the church serving in various administrative roles, and was particularly appreciative of the kindness of her fellow worshipers who offered her rides every Sunday to services in her later years.

The family wishes to thank the nurses, respiratory therapists, and team on the ICU unit at the Cornwall Community Hospital for their gentle care and compassion. While there, Barbara expressed that she hoped “I left the world a little better”. Hers was certainly a life well lived.

Barbara is beloved mother of Darren Lalonde and his wife Stephanie Sanborn of Stormont. Cherised grandmother of Elizabeth Kathleen and Ruby Ann Lalonde. Survived and deeply missed by brother Steven (Marilyn) of Guelph, sisters Hazel Fraser of Ottawa, Linda Fraser, and Nancy (Gary) Robinson of Westport, and nieces and nephews Holly, Andrew, Josh, Cameron, Heather, Kim, and Jenny. Predeceased by brothers Wesley and John (Sheila) Fraser. In keeping with Barbara’s wishes cremation has taken place. Due to Covid-19 restrictions, a celebration of life will be held at a later date. It was Barbara’s wish that if so desired, memorial donations could be made to the Cornwall Hospice.
Read Less

Receive notifications about information and event scheduling for Barbara

We encourage you to share your most beloved memories of Barbara here, so that the family and other loved ones can always see it. You can upload cherished photographs, or share your favorite stories, and can even comment on those shared by others.

Posted Feb 15, 2021 at 08:32pm
I am so sorry for your loss Nancy. It has been many years, but I will always remember your sister as a wonderful person. You and your family are in my thoughts and prayers.

Posted Feb 14, 2021 at 08:51am
My Deepest Sympathy Nancy to you and your family.
I know that no words can ease the loss you feel, but know that you are in my thoughts and prayers.♥️♥️

Thank you Linda. It means a lot to hear from you at this sad time.
DS

Posted Feb 13, 2021 at 11:44am
Barb was a great lady. It was a pleasure reconnecting with her when she lived at Valley Garden in Cornwall; I visited her room a few times and we chatted. We also visited at the Cornwall Legion during the annual CGH Nurses Alumni dinner in 2019 (I was there to videograph the 50th anniversary celebration of the last class of nurses who trained at the hospital). She kept saying that Stephanie would eventually bring to the Cornwall Community Museum Barb's donation of Dr. Gourley's medical bag; we'd still treasure having that in our medical exhibit room. I also have memories of her administering my allergy shots for six years; she was always so kind.
Comment Share
Share via:
SS

Thanks Don. We will get it out of storage and bring it over that would make her happy.
PL

Posted Feb 13, 2021 at 09:40am
To all of Barbara's family and friends, please accept my condolences.
As a child (10-13) I travelled across town, taking 2 buses to get my weekly and biweekly allergy shots. What made these trips so memorable was the welcoming of Barbara's smile and her affectionate hugs that I sometimes got. I have never forgotten her and she will remain in my thoughts forever.

Posted Feb 13, 2021 at 07:37am
We are very sorry to hear about the passing Barb, a mentor and friend for many years, and our most sincere condolences go out to her family. Regardless of the constant ,chronic discomfort she endured daily, Barb always had a welcoming smile and wanted to hear about what was going on in our lives and the community. Her witticism will be sorely missed. A beautiful soul is at peace.
Comment Share
Share via: 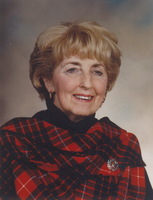 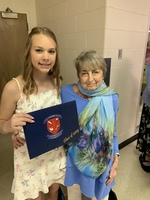