To share your memory on the wall of Olive Bellis, sign in using one of the following options:


Peacefully on February 8, 2021 at the age of 93 after a brief illness at Cornwall Community Hospital.
Born Olive Thomas, one of twins, in East Brighton, Brighton, England, July... Read More
BELLIS, Olive (née Williams)
1927 - 2021


Peacefully on February 8, 2021 at the age of 93 after a brief illness at Cornwall Community Hospital.
Born Olive Thomas, one of twins, in East Brighton, Brighton, England, July 10, 1927, and raised as Olive Williams with her brother Leslie and sister Daisy in Bethesda, Wales, a mostly Welsh speaking slate mining town in what is now Snowdonia National Park. Her adoptive father, Thomas John Williams, served in the Royal Army Medical Corps in WWI and owned the first motor taxi in Bethesda. She married the late Raymond Lewis Bellis in 1949, had two girls, and emigrated to Canada in 1957, where she had a son.
Olive was active in the Cornwall Ceramics Club, volunteered at Cornwall General Hospital, and attended Good Shepherd and Trinity Anglican Church.
Mother to Miriam, Mary, now deceased, and Mark, Grandmother to Valerie, Andrea, Jennifer and David, Great-grandmother to Andrew, Stephanie, Haley, Alexander, Samantha, Christina, James, Amy, Joseph, Ian, Jenna, Hayden
and Emily and Great-great-grandmother to Chloe, Noah, Liam
and Greyson. Sister-in-law to Anne, Aunt to Christine and Ruth, and Arfon, Steve, Karen and Chris and Great-aunt to Iwan, Tom and Hannah.
Thanks to everyone at Cornwall Community Hospital for their kind care.
Suggested donations to the Heart and Stroke Foundation of Canada or the Ontario SPCA. Funeral arrangements entrusted to the Wilson Funeral Home, 822 Pitt Street, Cornwall. Online condolences may be made at: www.wilsonfuneralhome.ca.
Read Less

Receive notifications about information and event scheduling for Olive

We encourage you to share your most beloved memories of Olive here, so that the family and other loved ones can always see it. You can upload cherished photographs, or share your favorite stories, and can even comment on those shared by others. 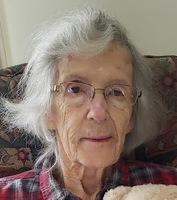