To share your memory on the wall of John Anderson, sign in using one of the following options:


It is with genuine sorrow that we mourn the passing of John Struthers Anderson on Sunday, April 4, 2021 in his 79th year at the Cornwall Community Hospital.


It is with genuine sorrow that we mourn the passing of John Struthers Anderson on Sunday, April 4, 2021 in his 79th year at the Cornwall Community Hospital.

John was born and educated in Scotland. He served in the British Army and the British Naval Service discovering his lifelong love of travel. John eventually chooses to work, explore and reside in Canada. He resided in Edmonton, Alberta, Yellowknife, NWT before finally retiring happily in Cornwall, Ontario. Those who knew John enjoyed his good nature, ready humour and his passion for golfing.

Left to mourn John's passing is Nancy Anderson, his constant friend and former wife of thirty-three years, stepson Ned Lockhart, Vernon, BC, stepdaughter Leslie Lockhart (Frank) and step-grandchildren; Connor, Chloe and Tea, all of Kirkland, QC. John was predeceased by his brother Neil Anderson, England. He will be sadly missed by his dear sister Agnes Hewitt, St. Catharine's, ON, and by his dear brother Robert Anderson, England, and Robert's family, Linda Anderson, Moira Anderson Hill, Brian Fraser and their families who loved Uncle John from afar and enjoyed his visits. He will also be remembered and missed by many friends from Edmonton, Yellowknife and Cornwall who knew John for his dedication, constant support, guidance and never-ending encouragement.

The family would like to thank those who have cared for John in this past year: Patrick Campeau, Nurse Next Door, Kerri Flaro and the Personal
Support Workers from Bayshore Homecare services, and the staff at the Cornwall Community Hospital.

As per John's wishes, there will be no formal service.
Funeral arrangements entrusted to the Wilson Funeral Home, 822 Pitt Street, Cornwall Ontario.
Much Loved and Not Forgotten
Read Less

Posted Apr 19, 2021 at 04:30pm
John and I, first met in the early 70’s, when I was 20. I was living with his sister Agnes, in St. Catharines and going to university at the time. He and I became great buddies. We spent the summer pruning grape vines which was very hot work and we would stop for a beer on our way home. I also taught John how to drive a car. Being a sailor, meant he didn’t spend much time on the road. When John moved away, from St. Catharines, I would see him when he came to visit his sister, Agnes. My memories of John are very fond ones. He was a happy guy, a good friend and very respectful. I will miss John a great deal. Cheers for the good times we had.
Love Lynda
Comment Share
Share via: 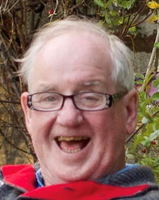